A scenically attractive trip leading through the highest parts of the Babia Góra massif on both sides of the border. Route runs along the ‘Perć Akademików’ – the best known and most impressive (but also the most difficult) route, allowing tourists to climb the Diablak from the north, but also to discover the charms of the southern, Slovakian, much less known and calmer side of the ‘Queen of Beskid Mountains’.

Caution! “Perć Akademików” is a one-way trail intended only for climbing up! Walking up it in winter is forbidden. In combination with route IX it is possible to plan a two-day trip, with an overnight stay at the mountain hostel in Slaná Voda, or on the Polish side, in Markowe Szczawiny.

The route begins at the final bus stop called ‘Zawoja Markowa’ on the border of the Babia Góra National Park (tickets for the park have to be purchased in the kiosk located there). The route follows the green trail signs up the Marków brook through Pośredni Bór, initially along an almost flat road and then along a clearly ascending path. In the end we leave the valley and ascend steeply, first to the ridge of Suchy Groń and later, in the longer distance, along the ridge itself. Finally we get to Kolista Polana, on the edge of which the black trail comes from the left. From here it is only several minutes more to follow the green and black trail signs to the Markowe Szczawiny clearing with the PTTK mountain hostel and the junction of tourist trails.

The PTTK Mountain Hostel in Markowe Szczawiny is one of the most popular facilities of its kind in Poland, and also a place of great significance for the development of mountain tourism in our country. The first, small wooden building stood in this place already in 1906 as the oldest Polish hostel in the West Beskid Mountains. The current, new building was put into use in 2009. Next to the hostel stands a smaller building, the so-called Goprówka (in its back part there is a permanent post of the Beskid GOPR Group). Inside there is a very interesting exposition of the Mountain Tourism Culture Centre PTTK. 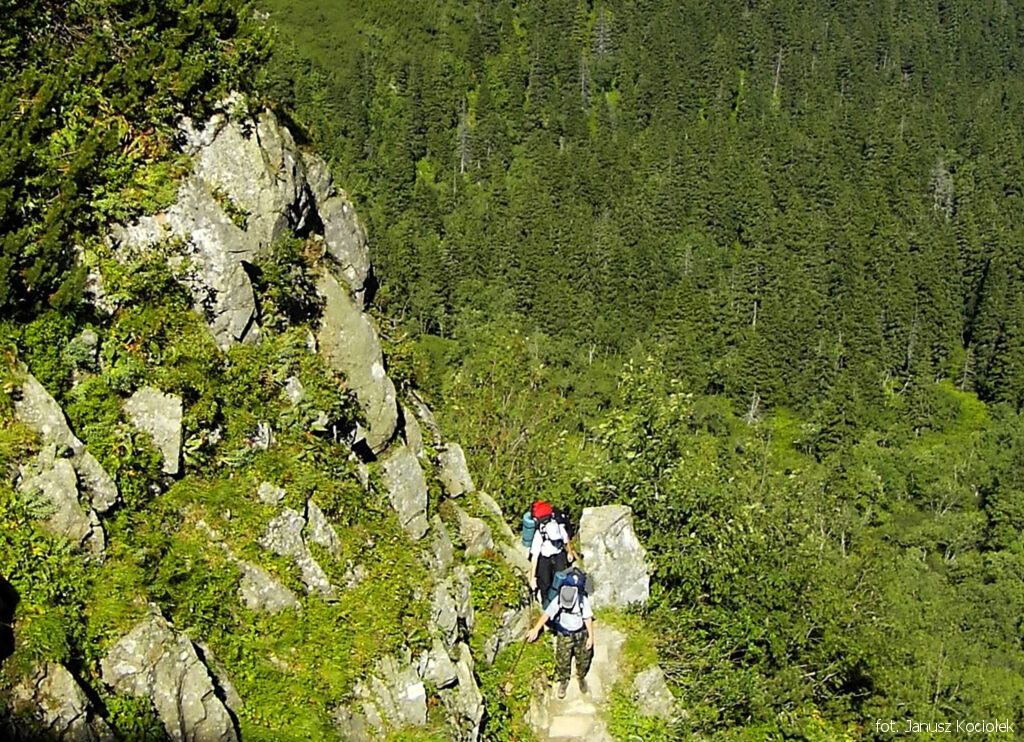 From Markowe Szczawiny the route follows the yellow and blue trail signs southwest. The route briefly follows the so-called Górny Płaj trail, an old hunting path established in the 1880s by the forest administration of the Habsburg family in Żywiec and recently extended and modernised by the Babia Góra National Park. At the crossroads, the route bids farewell to the blue trail, which continues along the ‘płaj’ and follows the yellow trail signs to a path ascending clearly along the Szumiąca Woda brook, flowing nearby. A little further on, we cross a few of its spring creeks and we reach the charming valley called Sucha Kotlinka. 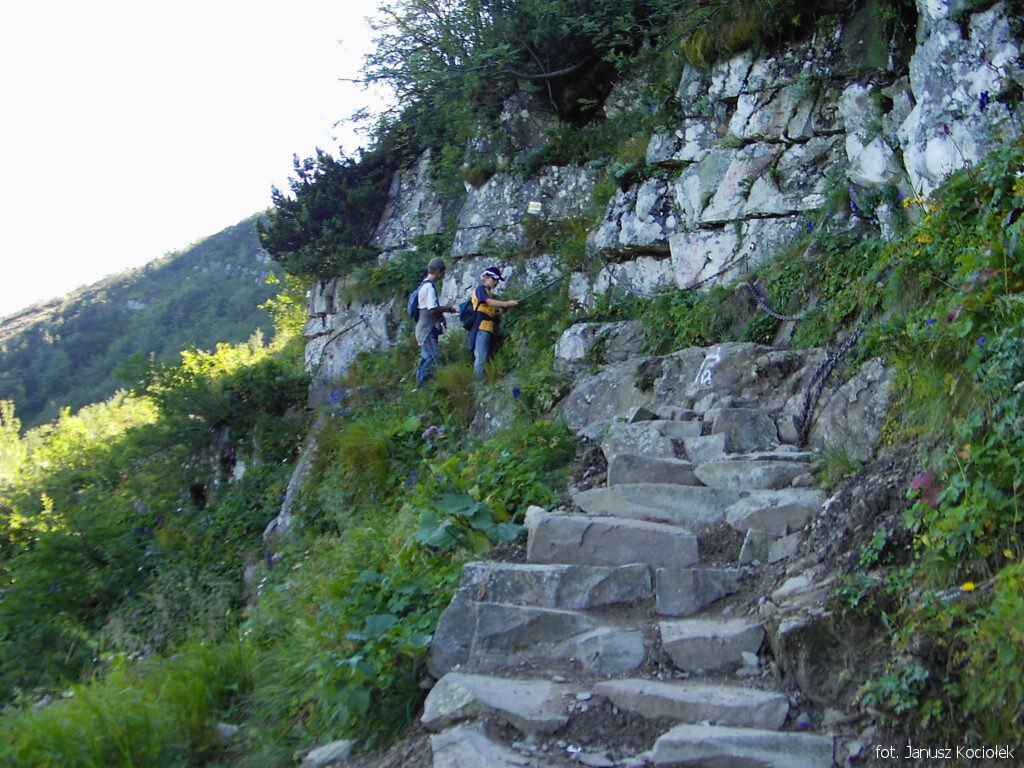 The most exciting part of the route begins here – the famous ‘Perć Akademików’. We ascend steeply through increasingly high mountain scenery. Gradually, a wider and wider panorama opens up. The route crosses the former “Piarżysty Żleb” and in front of us there is a rocky wall on a very steep northern slope of Babia Góra – Czarny Dziób. The most exposed part of the route begins. The route crosses the Czarny Dziób ridge, passing along a narrow rock shelf secured with a chain. Further on, the route turns right and climbs up the slope. Successive chains and single stemples help to overcome steep, exposed sections of the trail, as well as the most difficult place – an 8-metre high, almost vertical wall. 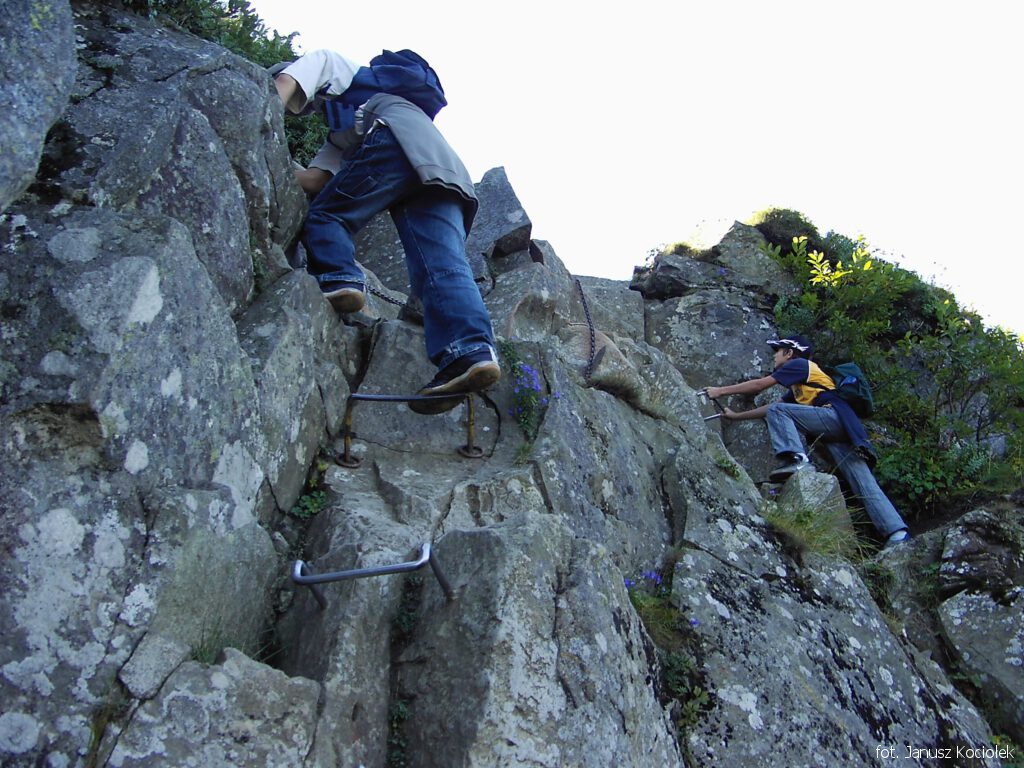 After passing the wall, the climbing excitement ends, but the route continues through a steep and strenuous climb up a fragment of a stone river on the northern slopes of Babia Góra. The route slowly approaches the Diablak peak. Just before the top the route passes a rocky recess on the right with a statue of the Mary’s Immaculate Conception – the Queen of Babia Góra. Next to it there is a provisional altar table made of stones, at which once a year, on Sunday in the middle of September, a Holy Mass is celebrated for the intention of the GOPR employees.

After a while the route reaches the ridge and the Polish-Slovakian border, where it follows the red marked Main Beskid Trail. The route turns right and approaches the Diablak, the main peak of the Babia Góra. 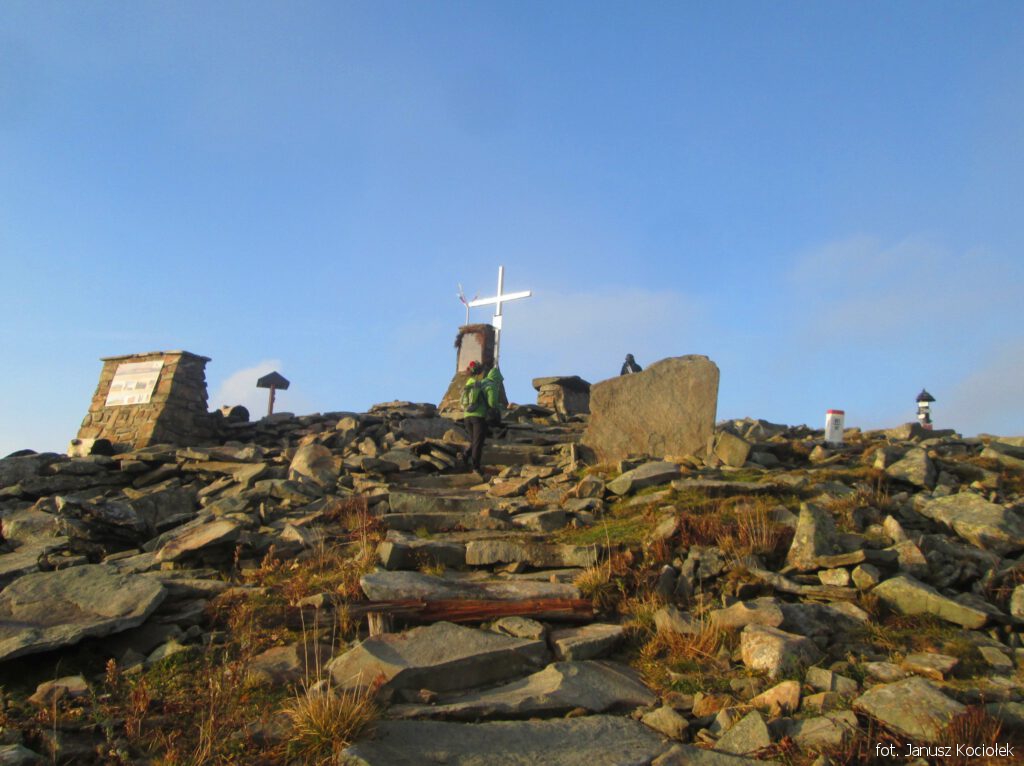 From the peak we go down following the yellow trail signs, following the borderline on its Slovak (western) side. After the first steep part of the descent we turn right, leave the border and descend gently from now on, descending between ever denser patches of dwarf mountain pine and finally reaching the characteristic rock plate, called Diabli Stół. Then we continue the descent through the clearing called Uściańska Polana, quickly losing altitude. We enter a forest and soon we reach a wide slope road with a tourist shelter and a viewing platform. 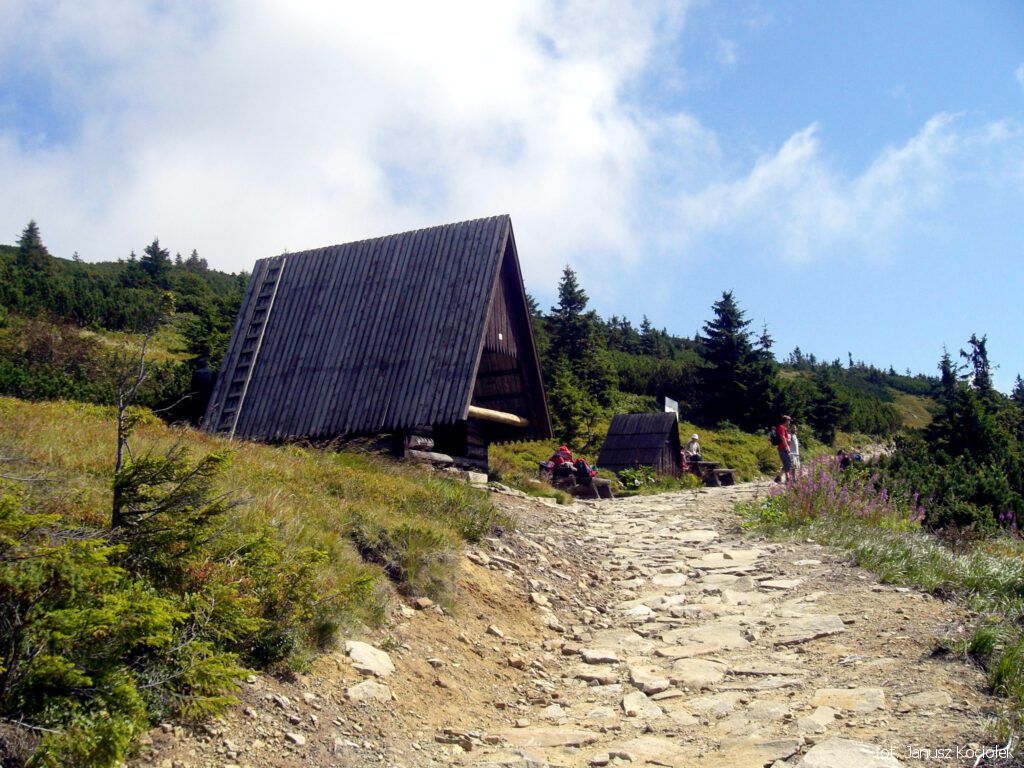 We cross the road and again descend steeply to the valley of the Bystra brook. Then we walk along this brook, already gently. Finally we leave the forest and we reach a junction of tourist trails near the so-called Hviezdoslav’s Forest Cottage, the most famous Slovak poet. There is a museum exposition in it, which is a branch of the Orava Museum with its seat in Dolný Kubín, dedicated to one of the greatest works of Hviezdoslav – a poetic novel ‘Hájnikova žena’ (‘The Foresters Wife’). During his frequent stays in nearby Slaná Voda, the poet made friends with a local forester and his wife, and the above-mentioned work is the result of this acquaintance. The nearby former farm building houses an exposition on the life and work of Milo Urban, a journalist and writer, who was born and spent his childhood here. 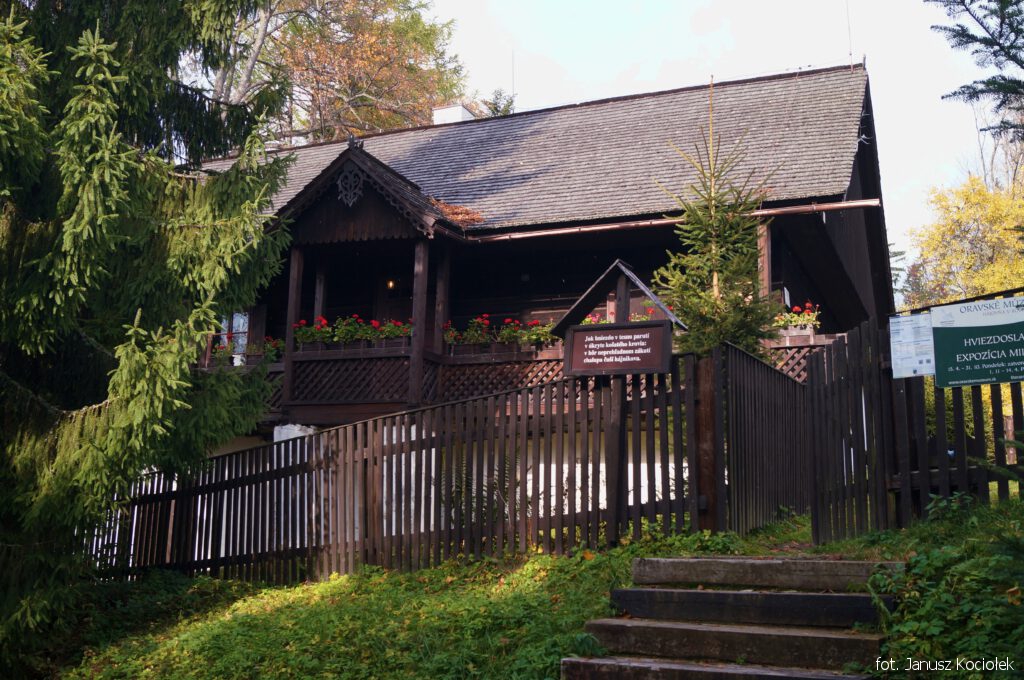 From the forester’s lodge we follow the yellow and blue trail signs westwards along the asphalt road. Cross the bridge over the Bystra brook and reach the fork where we leave the blue trail and follow the yellow signs again along the so-called Hviezdoslav’s Alley, a protected reserve. This path leads first through beautiful clearings decorated with mighty spruces, and then through the forest, all the time gently descending. After passing through the entire avenue, we reach the bridge over the Vonžovec brook, and behind it – to an asphalt road and near a tourist hostel in Slaná Voda, a small hamlet of the Slovak village of Oravská Polhora, whose name derives from the salt springs located here. At the turn of the 19th and 20th centuries, the existing spa attracted patients from all over Europe, but due to a series of events during and just after World War I, it went into decline. Recently, there have been plans to use the local springs again. Of the original spa buildings, only one villa has survived, which now houses the hostel. 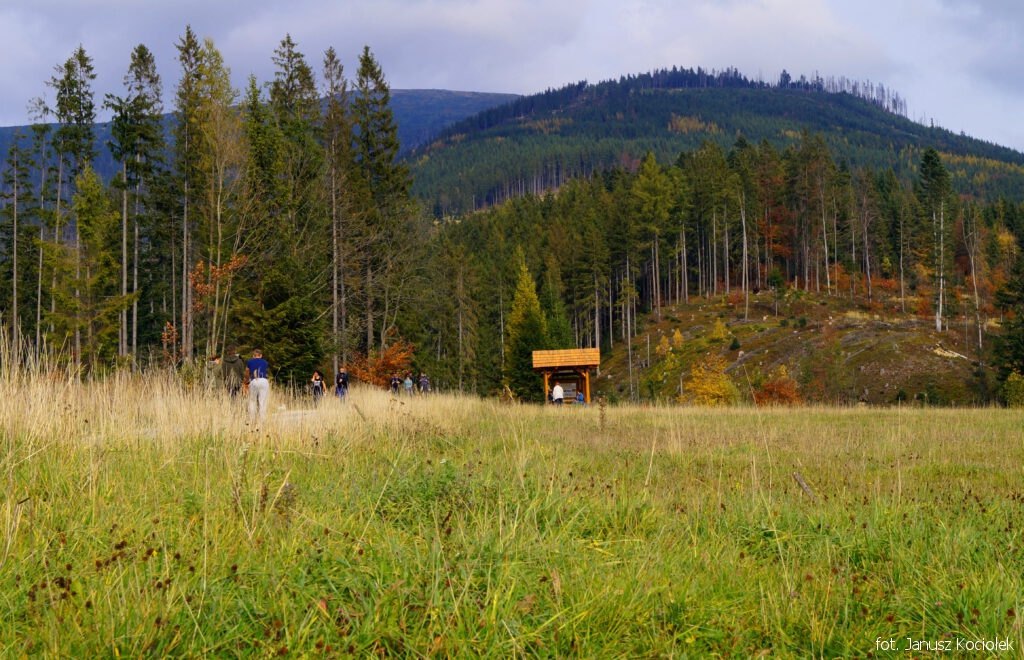 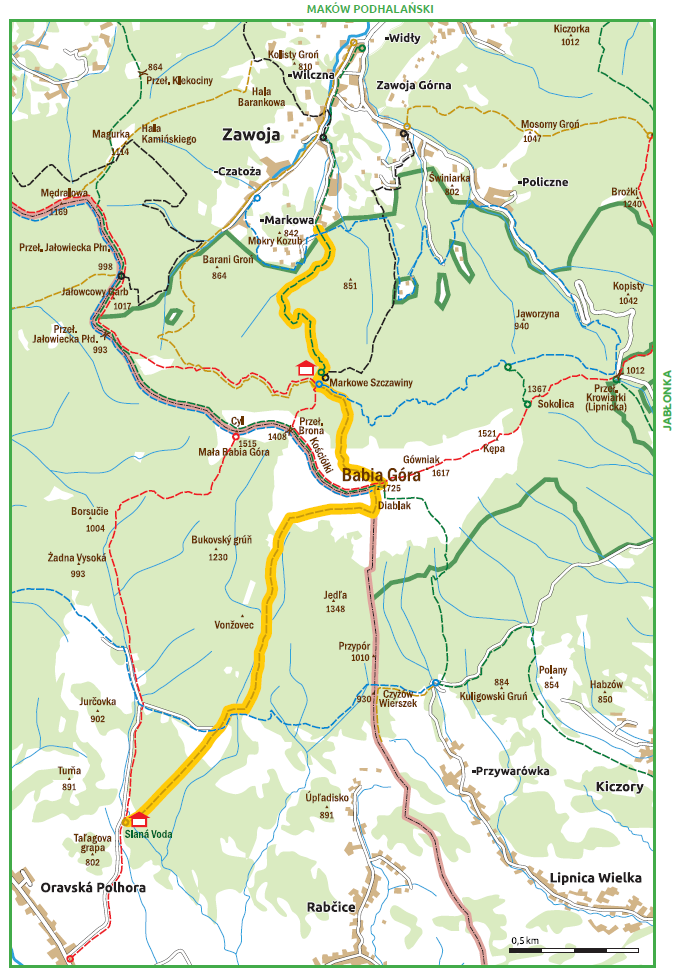